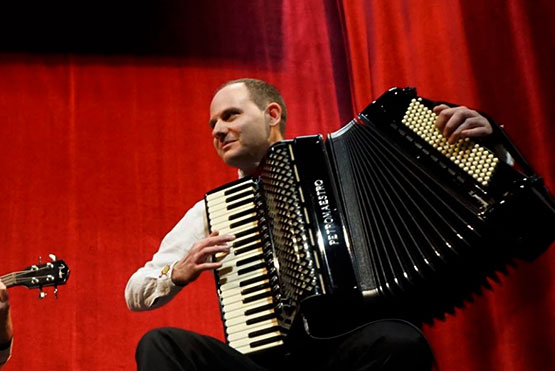 Vlada Veselinović was born on July 19, 1980 in Pirot. He first expressed his interest in accordion when he was just two years old. He completed the elementary music school "Vladimir Đorđevic" in Aleksinac (accordion department), class of Dušica Pejić from Pirot. There he acquired strong musical foundations and solid knowledge. The elementary school knowledge was not the goal, but just one step on his way. The elementary education only directed him and created a clearer picture of his favourite instrument - the accordion. Since traditional folk music was not covered in the curriculum of music schools, he continued to independently study all traditional folk music styles of the Balkans, to refine and to develop his own interpretation style on the accordion. Today, he successfully passes on his knowledge to others. He has a dozen years of work in folklore behind him, as well as more than ten years of collaboration with several orchestras in the city where he also lives - the City of Pirot. In recent years he has made numerous appearances on television and played concerts as an accordion soloist.

In 2009, he launched an online forum for accordion players and accordion fans, the site www.MuzikaHarmonike.com which has since grown into one of the largest forum related to accordion. The forum now brings together a large number of accordionists, accordion makers and craftsmen and fans of the sound of accordion.

In the absence of literature on traditional folk music and its performance and interpretation on the accordion, he came up with the idea to share his knowledge with other musicians by transcribing sheet music and publishing professional music literature. Since 2011, he has published several collections of scores as e-books in PDF format, which were later published in printed editions. A special mention should be made of the book "Škola narodne muzike za harmoniku / School of Balkan Folk Music for Accordion" (2014 edition), which as a unique textbook became highly sought after and praised by accordionists and accordion professors across Serbia and the world. This book is the first one that covers all the elements of performance of Balkan folk music on the accordion in a detailed and meticulous manner. Over time, this book has become the basis for beginners and a textbook used by many folk music teachers, and guidance to those who have already developed their playing technique and want to improve it and perfect their knowledge and repertoire. This book was published in English language in 2019: School of Balkan Folk Music for Accordion . In addition to the mentioned book "School of Balkan Folk Music for Accordion", he has so far published several other books and collections: "Pesma i harmonika / Song and accordion" (2015), "Virtuozni foršpili za harmoniku / Virtuoso intros and intermezzos (vorspiels) for accordion" (2015), "Rubato pesme / Rubato songs" (2016), "Balkan na moj način kroz zvuke harmonike / The Balkans expressed in my own way through the sounds of the accordion - original compositions by the author" (2016), "Vlaška kola na harmonici / Vlach kolo songs on accordion" (2017 ), "Pet šumadijskih kola na harmonici / 5 Šumadija kolo songs on the accordion" (2017), "Foršpili za sva vremena 1 / Eternal intros (vorspiels) 1" (2017), "Foršpili za sva vremena 2 / Eternal intros (vorspiels) 2" (2018), "Nova kola za harmoniku / New kolo songs for accordion - original compositions by the author” (2018), "Najlepša violinska kola / The most beautiful kolo songs for the violin” (2018), "Pesma i harmonika 2 / Song and accordion 2” (2019), "Igre i pesme iz Pirota i okoline / Dances and songs from Pirot area” (2020), "With Accordion Around the World” (2020), "Škola narodne muzike za harmoniku 2” (2021), Pesma i harmnika 3 (2021), Naučite note uz narodnu muziku (2022). 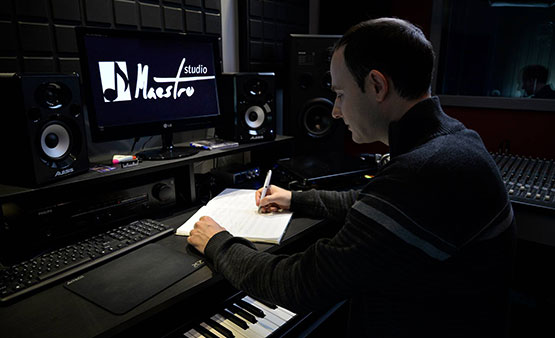 His quality and diligent work in the field of music earned him recognition and huge support from all over the world. The online accordion forum he founded, as well as his original compositions, drew attention to him and earned him the respect and recognition of many renowned accordionists. His dedicated companionship and frequent collaboration with many great accordionists from Serbia as well as from all over the world, allow him the privilege to constantly strive to further enhance his knowledge and experience related to the accordion. The support and accolades he receives from musicians mean a great deal to him and provide the incentive for him to continue along the path he had chosen because it is clearly the right path: the path of pure art and tradition. He has proven himself not only as a book author, but also as a composer of original music, as well as an accordionist whose faithful interpretations preserve and celebrate traditional folk music. In 2015 he received a recognition for his intensive work in the field of accordion and popularization of this instrument at the festival "The first accordion of Vojvodina" in the village of Stapar, where he also performed as a guest of honour. Vlada Veselinovic's biography was published in the encyclopaedia "ACCORDION AND WORLD'S BEST CONTEMPORARY ACCORDIONISTS" (Times Square Press. New York, 2019). Interviews and articles about him have been published in the prestigious American accordion magazine "Accordion Stars", as well as in "Stars Illustrated" magazine, also published in America. In the book "The World's Best of the Best and Most Illustrious" published in 2020 also in America (published by Stars Ilustrated Magazine, Times Square Press, New York), he was included among the world's most famous names from various fields, not only music but also film and theater, fashion, television, politics, sports, etc. There he was honored as the author of the year for professional music literature. At the beginning of 2021, Vlada Veselinović was included in the “Accordion World Hall of Fame” founded in America in 2018 by FAMSPA (Federation of American Musicians, Singers and Performing Artists Incorporated). Since 2021, he has been a correspondent from Serbia for the American magazine "Accordion Stars".

In addition to the support he receives from every part of the globe, he is also sought by students from all over the world who come to him to improve their accordion playing technique. Now recognized as an instrumental interpreter, with his precise notation and knowledge of the various Balkan folk music styles, he has also proven himself to be a successful educator.

He strives to remain true to from the traditional sound, without changing the original sound by using the modern and higher quality equipment of today, he records his songs in his music studio "Maestro" in Pirot. The studio was founded from the desire to share his talent and knowledge with listeners and admirers of his music. Because of his refined ear and taste for music, he was also sought after in other areas of music as a composer and arranger of songs. He has also received rewards for his achievements in studio work.

The most important fulfilling work for him are his compositions. In 2016 Vlada Veselinović's first instrumental album was released, entitled "The Balkans in My Way Through the Sounds of the Accordion". Compositions from the album very quickly found their way to the audience and entered the hearts and ears of all who love the sound of the accordion. On the second album "New kolo songs", which was released in 2018, numerous compositions were composed in the style of Šumadija kola, where the author retained his recognition for his unique playing style and signature arrangements. In May 2020, he released the third CD, entitled "With Accordion Around the World", with arrangements of world famous compositions. For listening to compositions and interpretations of Vlada Veselinović, please visit: YouTube - Vlada Veselinovic channel. 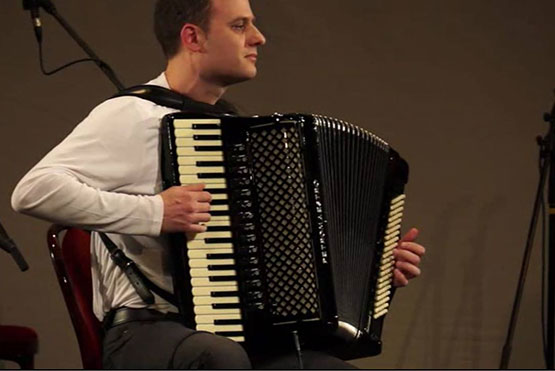